An excursion on the Aquarius is not just a simple tour, but a real mini cruise around the most beautiful bays and inlets of the Tremiti islands.

Setting off from the port of S. Domino – we are located on the right as you get off the ferry, just past the ticket office – you will travel along the southern coast of the island of S. Domino.
Having passed the Cala delle Arene, one of the island’s two sandy beaches, you will be able to admire the mesmerising Cala dello Spido with its turquoise waters and rich vegetation descending almost to the sea, followed immediately by the Punta dello Spido jutting out into the sea and its marvellous wealth of underwater life. Next is Cala Matano embraced by luxuriant vegetation and chalk cliffs.
Cala del Pigno follows, and then the cliff called Elephant’s cliff, because its shape recalls an elephant kneeling to drink.
A little further on you will see the Cala del Sale, with its sloping sea floor populated with many varieties of fish, the Cala delle Roselle and, immediately afterwards, the Grotta delle Viole (The Grotto of Violets), so called because in springtime wild violets flower on this rocky coastline, and also because of the deep colour of the water. A little further on lies the peaceful and undiscovered Cala dello Zio Cesare.
Following on from Cala dello Zio Cesare the panorama changes; so far the landscape has consisted of a series of inlets, a chalky rock coastline and a relatively shallow sea floor. The sea suddenly becomes deep blue with a coastline formed prevalently of cliffs that fall vertically to the sea: this is the north western side of the island.
You will immediately catch sight of the San Domino lighthouse followed by an opening in the cliff face: the Grotta del Bue Marino. This almost 70 metre long grotto ends with a small pebble beach. In summertime, towards dusk, the setting sun shines almost the through the entire length of the cave, emphasising the colours and the transparency of the water. Diomedea albatrosses nest in the nooks and crannies of the cliffs, called Ripa dei Falconi, above the cave. Next we reach Architiello di San Domino and Punta Secca.
Beyond Punta Secca a new change of panorama; whereas up to now the vegetation has reached almost to the sea, it is now more shrub-like and further away from the coast; the northern side of the island of San Domino features a rocky coastline that has been shaped by the wind. However the sea retains the same intense colouring from greens to turquoises and blues seen on the southern side, as well as the same wealth of underwater life seen earlier.
We are greeted almost immediately by the Grotta delle Rondinelle (Grotto of Swallows); the Cala dei Benedettini, with its jagged coastline soon follows, together with the Cala degli Inglesi (Englishman’s Bay). This is where, four years after the Expedition of the Thousand, the Lombardo sank: one of the two ships Giuseppe Garibaldi and his thousand men had used to reach Sicily. Following the Cala degli Inglesi the Cala Tramontata comes in to view and then Cala Tonda.
Having passed Cala Tamariello and Punta del Diamante you can enjoy the crystal blues and emeralds of the sea embracing Pagliai.
Leaving San Domino in the direction of Capraia we come to Cretaccio, so called because it is prevalently composed of a clayey rock, with a deep green and azure seabed.
Near the island of Capraia you will get a chance to admire, through the glass bottom of the boat or even with a mask from the surface of the water, a 4 metre high underwater statue of Padre Pio, sitting on a sandy bed 13 meters deep, surrounded by myriads of fish.
On the return journey you will pass the island of San Nicola; whether along the north side of the island or the south will change nothing, you will in either case be impressed by the thousand year history of this island.
Its grass land, the Greco/Roman cemetery, La tagliata, the castle and lastly the fortifications at the port; all surrounded by a sea of incredible colours and rich in marine life, including vast expanses of Posidonia Oceanica, Mediterranean sea grass, to be seen in the channel between Cretaccio and San Nicola and in the various shallower areas on the southern side. 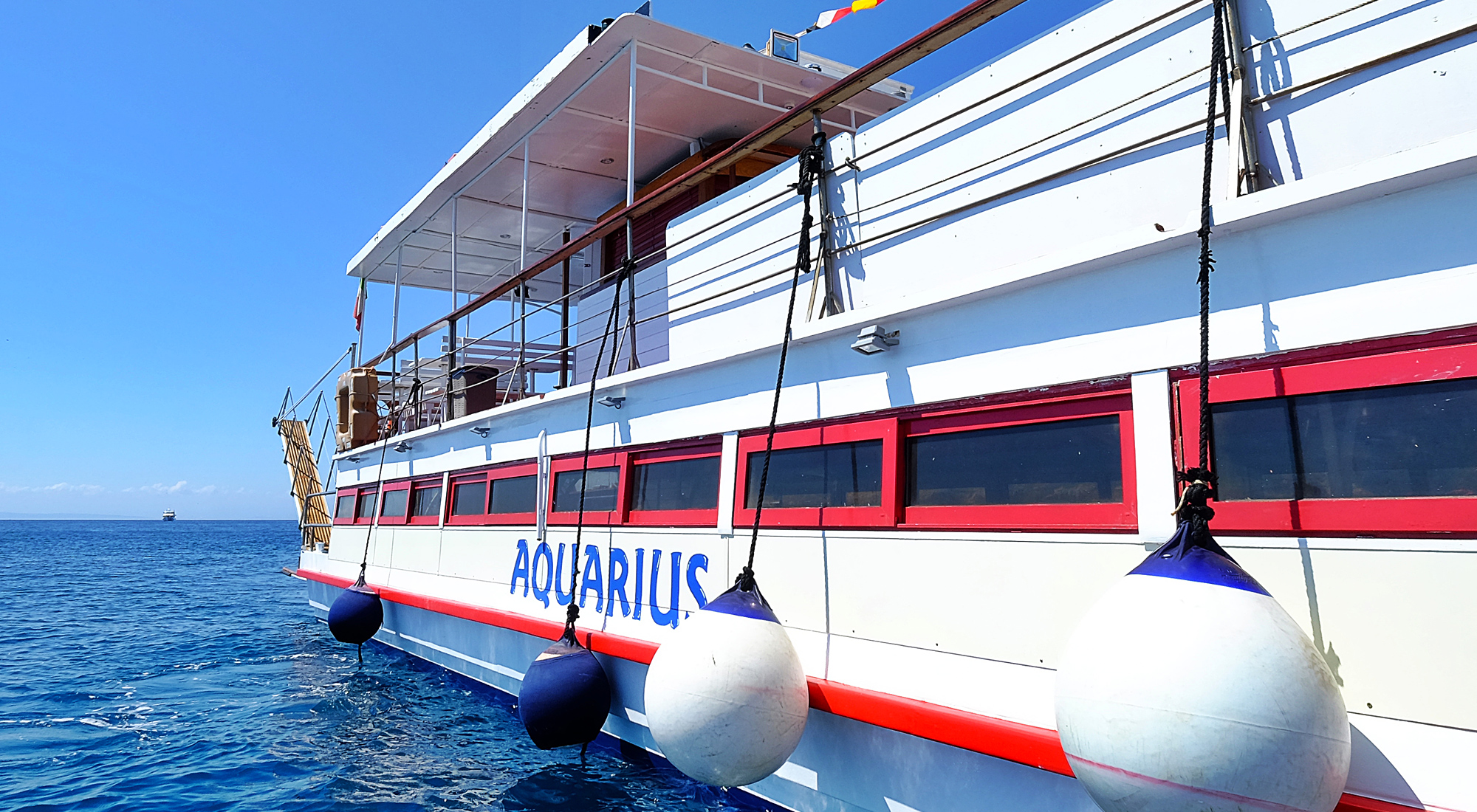 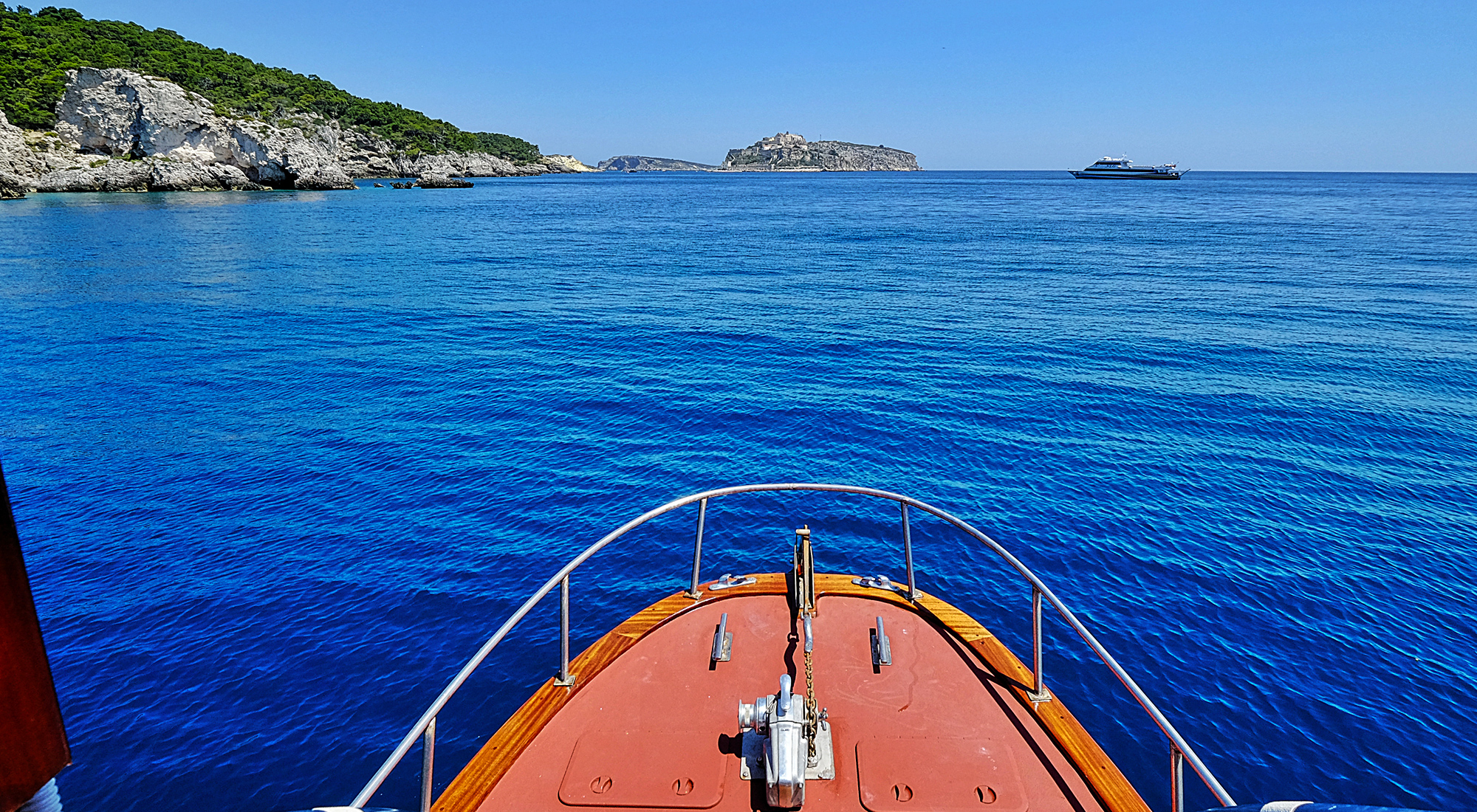 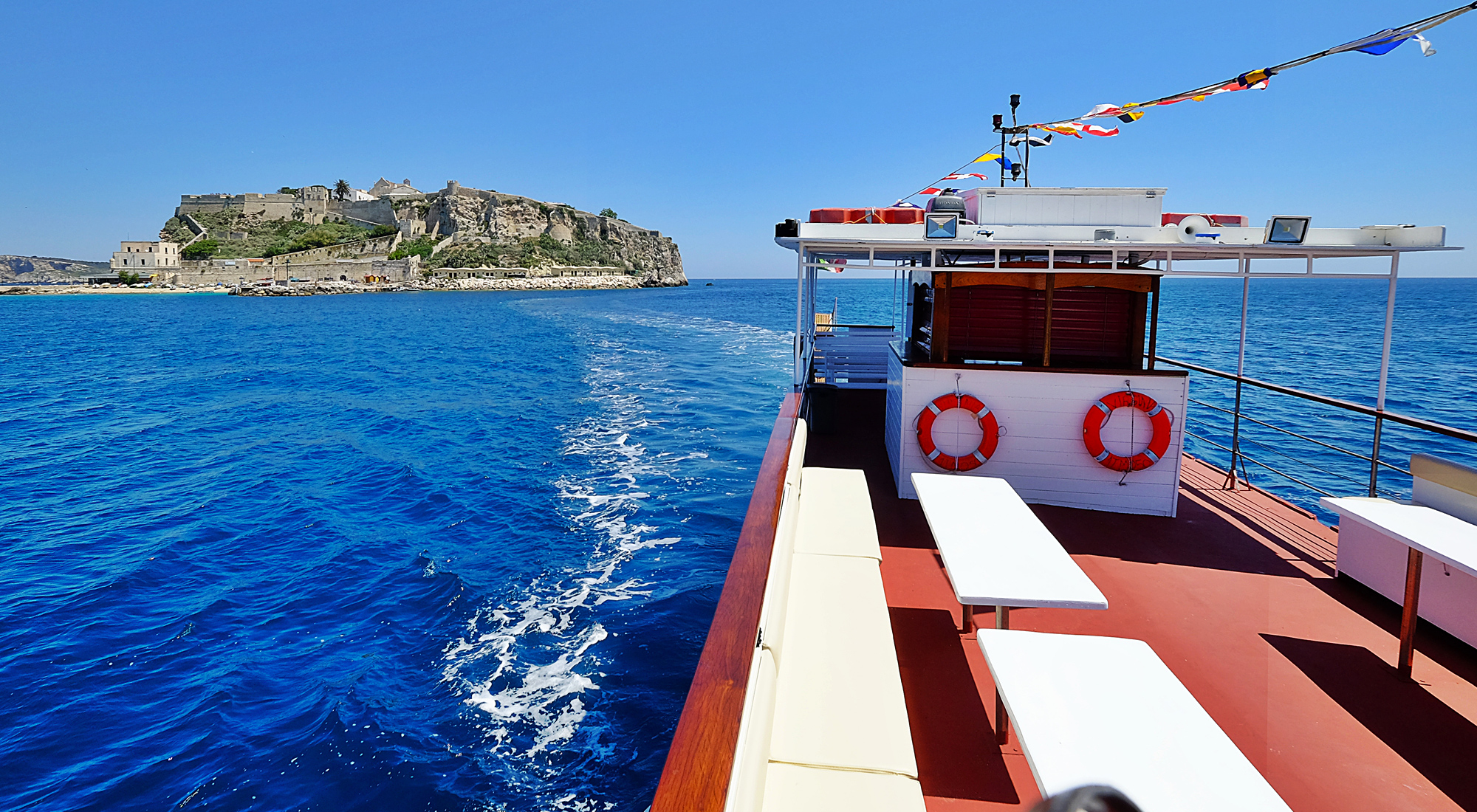 The night excursion around the Tremiti islands takes on an even greater and more fascinating meaning: listening to the sound of the Diomedea albatrosses, whose sad, plaintive call is very similar to that of a child crying. Legend has it that the Aechaian commander, Diomedes, Ulysses’ inseparable companion – even in Dante’s Inferno – did in fact die on the Tremiti islands. His desperate companions were turned into birds by the goddess Aphrodite and since then, when the sun sets and during the night, you can still hear their cries.
During the evening excursion the Aquarius will stop near the cliffs where these birds nest, and turn off the motors and lights so you can listen to these cries while being gently rocked by the waves. 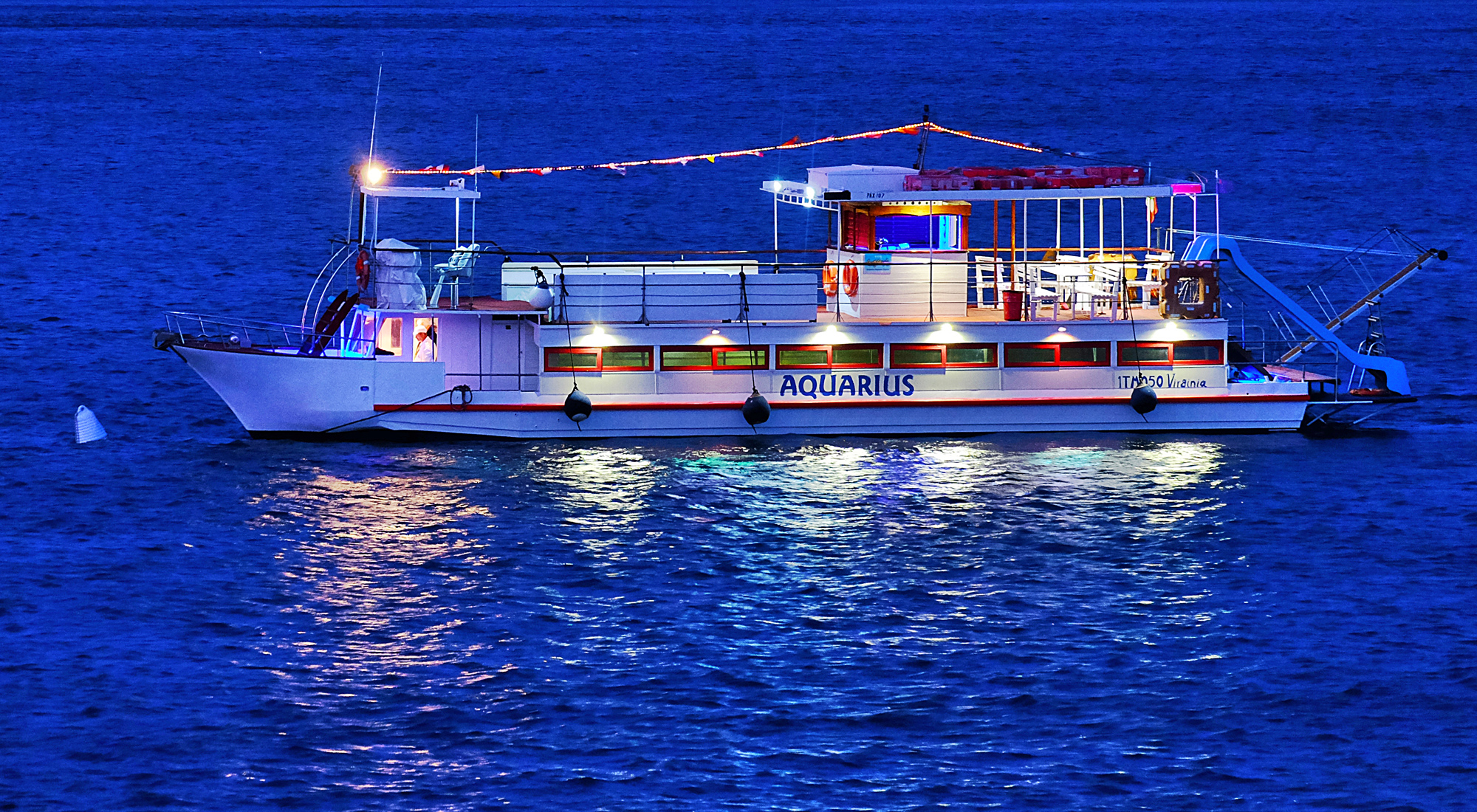 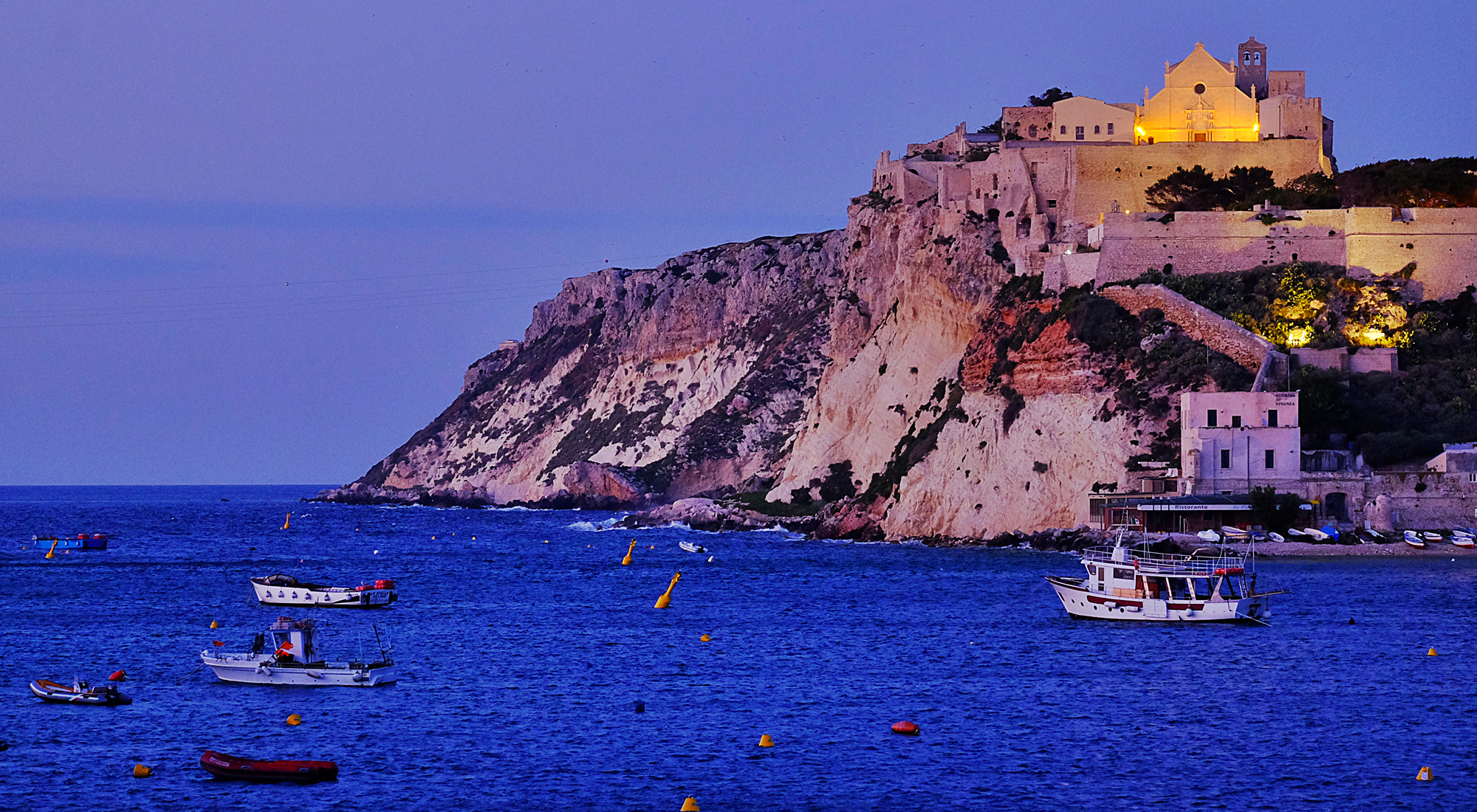 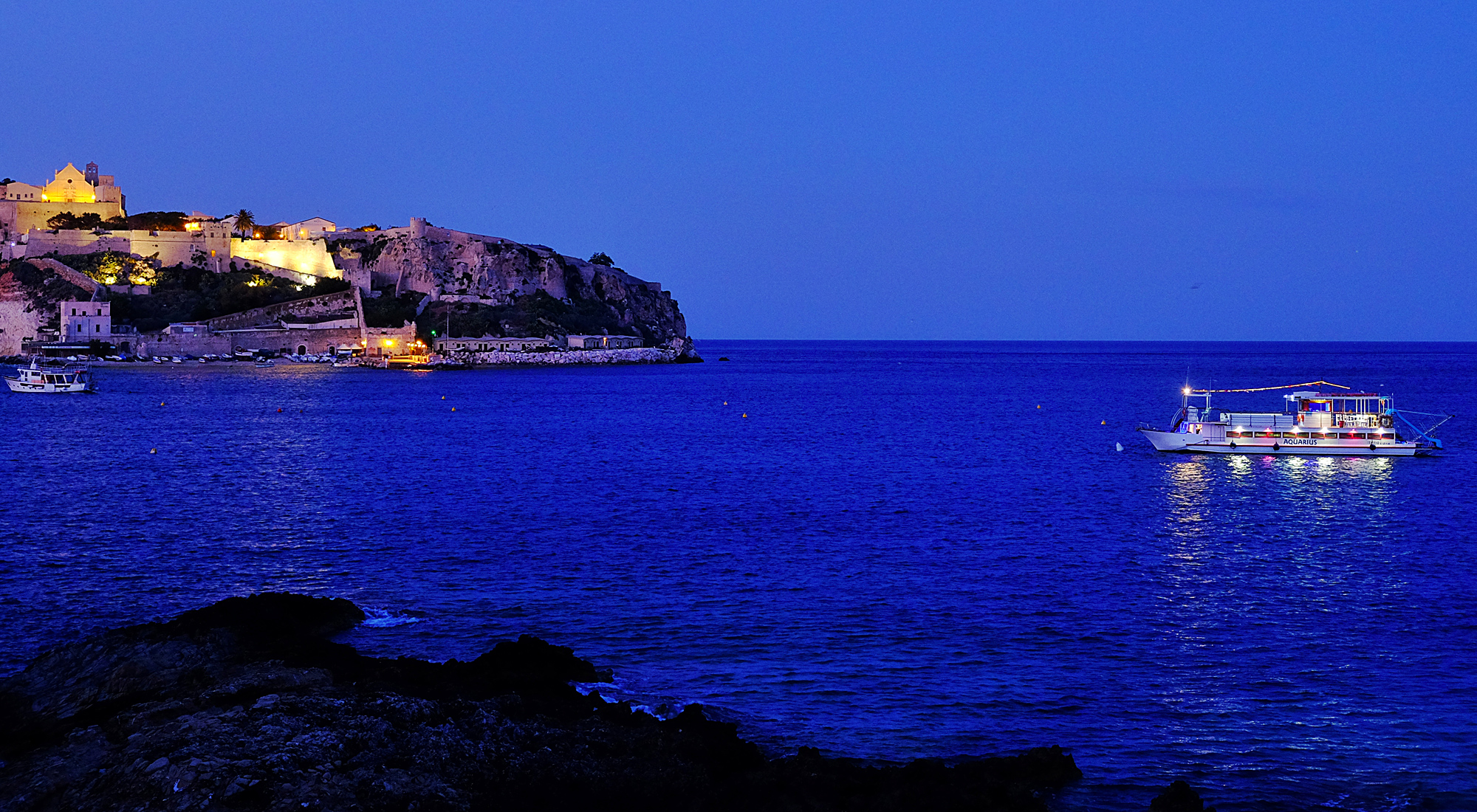